Home » Eye Care Services » Glaucoma » What are the Symptoms of Glaucoma?

What are the Symptoms of Glaucoma?

Typically there are no symptoms in open angle glaucoma until late in the disease, when extensive irreversible damage has already been done.

Open angle glaucoma is a disease where fluid builds up in the eye creating pressure. The pressure in the eye causes damage to the optic nerve, which in turn causes vision loss. The eye pressure does not have to be very high – sometimes it is even normal – so generally the patient does not feel any pressure sensation or pain.

Open angle glaucoma development is usually a very slow process. It can take many years to develop. For this reason, the very slow loss of peripheral (side) vision is so gradual that it is often not noticed by patients until quite advanced. Late in the disease, patients may notice that parts of their vision are missing or that they are developing “tunnel vision” with a central clear area and loss of side vision.

The lack of symptoms until late in open angle glaucoma makes this disease very dangerous. Glaucoma is often diagnosed late and is one of the most common causes of blindness in the United States. Unfortunately, glaucoma damage is not reversible. Early detection with regular screening is the best way to prevent vision loss from this disease.

Most glaucoma is open angle as described above, and does not have symptoms. Closed angle glaucoma (also called narrow angle glaucoma) accounts for only 1% of all glaucoma cases, but is generally very symptomatic.

Patients experience a severe rise in eye pressure that can occur suddenly when the drain in the eye closes. These patients start out with less space near the drain of the eye, which becomes more crowded with age as the natural lens in the eye grows. Unlike the very gradual process of open angle glaucoma, closed angle can occur in hours.

Closed angle glaucoma is a medical emergency. It must be treated urgently with eyedrops, oral medication, and/or laser. If not treated promptly, permanent vision loss or blindness can occur. Closed angle glaucoma may occur in both eyes at once, or start in just one eye. 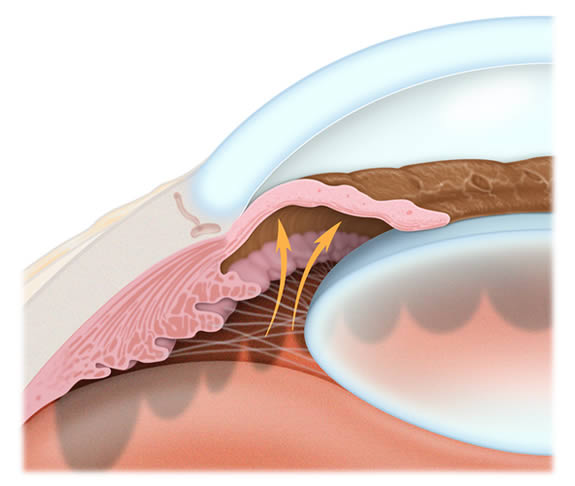 How can I prevent vision loss from glaucoma?

For more detailed information on Glaucoma and how Glaucoma is diagnosed and treated please select a topic below:

Read our reviews on
Yelp!

If your message is a medical emergency please call 911, do not use this form.

For other urgent matters, please call the office directly.

Please know this is not a secure or encrypted means of communicating with our practice.